My interest in narrative is evident in almost everything I write. I think of narrative structurally, thus in terms of defining conditions, but also as a cognitive resource. In my work, I look at the evolution of narratives, at their impact of new media, but also at the limitations that an approach focused exclusively on narrative may incur into. I also enjoy writing about individual films, as in my articles on Casablanca, Boyhood, Clouds of Sils Maria, the series Black Mirror, All That Heaven Allows, and others.

The concept of beauty has, in philosophical aesthetics, a complex history. Linked to disinterestedness by Kant, deemed an “abused” notion by Arthur Danto, and brought back to the attention of philosophers and critics by scholars such as Marcia Eaton and Peg Zeglin Brand, the notion of beauty has found multiple meanings, uses, and interpretations. In this paper, I am interested in analyzing the relation between beauty and disability and, specifically, in tracing how beauty can emerge from the cinematic portrayal of disabilities, broadly construed. More specifically, I will argue that the 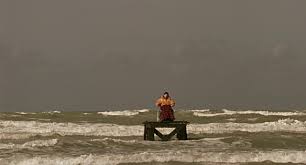 richness of cinematic experience is capable of making us contemplate, and provide examples, of supposedly antithetic accounts of beauty. By showing how a Kantian notion of beauty can co-exist and even interact with engaged, contextualist, and socio-politically informed analyses of beauty, film provides us with a critical, but also more nuanced standpoint on existing philosophical debates.

That Old Egyptian Custom (Costume?). Fashion and All That Heaven Allows

Films can do philosophy and Douglas Sirk’s 1955 melodrama, All That Heaven Allows, is a good candidate for this kind of analysis. Specifically, I am here interested in showing how the very use of fashion, and Sirk’s sensibility toward it, can contribute to the philosophical understanding of what fashion is. For while the analysis of fashion in this movie allows us to deepen the discussion on mise-en-scene, set design, and colors in the film, it is also a way of reflecting on the performative nature of fashion. I consider such nature in relation to two of the outfits that Cary wears in the movie: the red dress and her grey tailleur.

2018, May. Love and Friendship in the Movies, Princeton University. Paper: “That Old Egyptian Custom (Costume?). Fashion and All That Heaven Allows” Clouds of Sils Maria, Olivier Assayas’ 2014 feature is not, strictly, an example of meta-cinema. And yet, the “meta” prefix is not out of place. In a way that is reminiscent of Luigi Pirandello’s oeuvre and, most notably, of his take on character impersonation, the film plays with the history of film, with the layering of performances, crossing theater and film, actors and characters. Set in the stunning landscape of Sils Maria, a location that is as naturally breathtaking as it is dense with literary and philosophical references, the movie tells the story of Maria Enders, played by Juliette Binoche, an actress that having reached the peak of her career is now contemplating her role as a mature woman and actress. In this chapter, I focus on how the duo Binoche/Maria Enders encourages a reflection on what it means to be a character, to create one for ourselves, and to assess the very viability of such a creation. My goal is to emphasize a connection between such a reflection and the philosophical debate on personal identity, and on how such identity may unfold. More narrowly, I will argue that Clouds of Sils Maria is capable of adding a significant contribution to the debate, within analytic aesthetics, on the advantages and the dangers of seeing our lives as narratives. For while watching the feature may prompt an agreement with Peter Lamarque’s criticism of the “narrative view,” which highlighted how a “story-like” narration of our lives might transform nonfictional, factual events into fictional ones, we are also reminded of how such a crafted and constructed rendition of facts may ultimately be inevitable.2018, (forthcoming) David LaRocca (ed.) Metacinema: Representations of Filmic Self-Reference. Bloomsbury.

Naturalized Aesthetics and Criticism: On Value Judgments in Murray Smith’s Film, Art, and the Third Culture. 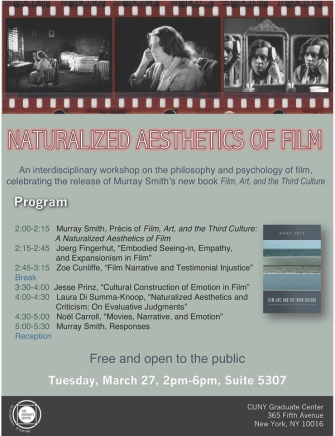 Technology and TV shows: A Turn in Science Fiction

Television shows are increasingly featuring technology-related themes. Black Mirror, Westworld, and Mr. Robot – to mention three of the most significant – have captured the attention of the audience by engaging narratively and aesthetically in the representation and investigation of dystopian futuristic scenarios. As typical in the sci-fi tradition, these shows do not shy away from themes such as clones, avatars, and dramatically powerful hacking devices. And yet, the way in which these themes are presented is exemplary, I believe, of the emergence of new and peculiar trends, trends that are, in significant ways, departing from the standard sci-fi tradition of the 1980s and 1990s.

In this paper, I reflect on the implication of such a “technology shift” in relation to three related themes. First, drawing on Noël Carroll’s account of “monsters” in horror films, I will examine the phenomenological nature of such displays and argue that – in its most successful examples – the way in which technology is presented is based on the careful balance between, on the one hand, the category of the alien and the anomalous and, on the other hand, the category of the familiar and the intimate.

Secondly, I will argue that it is precisely the aesthetic combination of the two opposite categories listed above that allows the audience to both sympathetically and empathetically engage with the characters.

Lastly, and more speculatively, I am interested in how such technological displays might have benefited, for their commercial as well as artistic success, from the production systems of platforms such as Netflix, Hulu, and HBO Go. Representing the future of television and, in some cases, the end of “cable TV”, these platforms have changed our viewing modalities by allowing us to stream several episodes consecutively on multiple mobile devices. They have allowed us, in a metaphorical fashion, to better understand and appreciate the treatment of technology we find in recent TV series by making us, simultaneously, its viewers and consumers. The recent spike in the cinematic representation of technology is, to this extent, both the result of an interest in the present and future influence of technology in our lives, and of the widespread presence and potential of recent innovations in the technology behind the movie image.

2017, July. International Conference on Moving Image and Philosophy in Porto. Paper: “Technology and TV series: A Turn in Science Fiction.”

Boyhood and the Fiction Non-Fiction Divide

Filmed over twelve years, Boyhood is, in both its production and aims, a novelty in filmmaking. In my essay, I concentrate on the insights that the film can deliver in relation to the distinction between fictional and nonfictional narratives in film. Specifically, rather than focusing on a strict binary distinction between fiction and nonfiction, I propose a hybrid model based on the collaboration of the two. Boyhood, I suggest, bypasses the make-believe mechanism that is usually adopted when engaging in fictional narratives by making the nonfictionality of time the macro-question that animates the fictional unfolding of the story.

One of the most watched movies of the past century, Casablanca is both a classic and a “cult” film. Casablanca is also, from the perspective of film studies and philosophy of film, a ground for dissonant critical voices. In my article, I consider two strands in the critical reception of the film. The first is expressed by the work of Andrew Sarris who famously summarized the success of the film with the expression “the happiest of happy accidents.” The second is Umberto Eco’s semiotic analysis who claims that Casablanca is not one movie but “the movies,” and that “to become a cult, a movie should not display a central idea but many.” My position differs from both: I suggest a radically different reading of Casablanca, one that takes distance from both auteur theory and semiotic analysis (of which I am rather skeptical) and that concentrates on the cognitive and philosophical value of the film. Casablanca is a cult film because it provides a visual and narrative solution to what I explain, through the work of Bernard Williams, as one of the leading problems in the application of rule utilitarianism. Rick is a model utilitarian: we admire in him an ethical conduct that we endorse in theory but fail at in practice.

The Decline of Hollywood Narratives. How the Internet is Shaping the Creation and Appreciation of Film

In November 2012, A.O. Scott and Manohla Dargis, two of the most prominent New York Times film critics, published a joint review of a number of recent films, which included Cloud Atlas and The Master, entitled “When Do we ‘Get It’?” The aim of the article was to question the “box office” success of films that, unlike most examples of popular filmmaking, lack a recognizable narrative structure. Despite often reaching the status of cult films, these films defy the causal narrative structure that has long been regarded, to adopt Noël Carroll’s expression, as one of the features behind the “power of movies.” This phenomenon has recently been acknowledged by narrative theorists and film scholars who have begun to classify these films as “puzzle narratives,” “mind game films,” etc. These analyses focus on the narrative innovations presented by such films, and yet, they often fall short of explaining the popular success, and the apparent ease with which the audience is embracing them. My solution takes a different direction that stems from an analysis of the cognitive mechanisms behind the understanding of both causal and complex (or puzzle) narratives. The success of these films depends, I argue, on new cognitive forms of understanding and appraisal that are largely based on digital and interactive features of communication, among which, and primarily, Internet networks. It is widely assumed that the historical evolution of film cannot be detached from economic, technological, historical, and social changes. My essay introduces a new factor: changes in the narrative construction of film are caused by cognitive changes in the audience’s neuropsychology and behavior, and should thus be explained.

2014, “The Decline of Hollywood Narratives. How the Internet is Shaping the Creation and Appreciation of Film,” in International Conference on Philosophy and Film eProceedings (Susana Viegas & Maria Teresa Teixeira eds.), Vol. 1: 160-173.